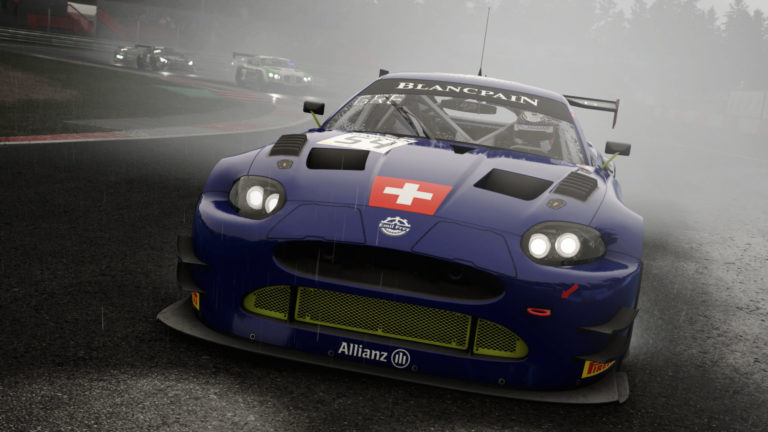 ACC racers will have access to a tricky combination with the new V8 car and the challenging Belgian circuit, which will be paired with exclusive new Special Events to challenge worldwide online leaderboards, giving everyone the chance to join the “Competizione”.

Kunos Simulazioni developers are using the useful feedback provided by the community through the official forum to work on the best simulation and gaming experience possible for Assetto Corsa Competizione: that’s why the work of the last month has been focusing on overall stability and consistency of the code behind the game. This flow will cause the Spectator mode, the Multiplayer voting system and the other “visible” features to come with our next updates and the 1.0 version of the title, although this decision to make ACC basis even more solid will hopefully pay in the future by providing these features with a better overall experience as a result.

v0.5.0 Changelog
– New Emil Frey Jaguar G3 car.
– New laserscanned Circuit Zolder racetrack.
– New special events with online leaderboards.
– Fixed disappearing main menu UI in VR.
– Texture memory optimizations.
– Fixed a chase cam rotation bug.
– Fixed a TV camera bug.
– Car light improvements in TV camera views.
– New inertia calculation method and new more accurate inertia value (advice for setups, use softer fast damper to let the body move and settle, instead of having the car and wheels jumping)
– New motion ratio calculation for dampers resulting in more accurate values dedicated for each car.
– New ABS feature. ABS now never lets higher than 70% difference between left and right brake pressure. Improves behaviour on extreme torque vectoring, like braking and going through a water puddle with one side of the car, but can result in inner wheel locking if driver insists braking hard while turning into a turn. Might need more rear brake bias on certain cars.
– Improved ABS logic, resulting in better turn-in under braking, on certain cars (most notably modern cars such as the Huracán, F488, BMW M6).
– Improved TC off on gear-change functionality. TC is instantly switched off and on again when a gearchange occurs, in order to protect the engine and drivetrain from heavy vibrations, especially on situations where kerbs and the engine limiter are involved (part of real cars’ TC logic too, occasionally they will even not allow the gearchange). Now the TC off timing is car-dedicated and optimised. Some cars might handle a gear change better than others.
– Improved tyre thermal model, especially wet tyres.
– Improved tyre grip when tyres are overheated, such as after a spin.
– More tyre wear when tyres are overheated, no free meal.
– Corrected bumpstop position and functionality of the Ferrari 488 GT3.
– New ECU maps for all cars. ECU maps now influence power, fuel consumption and throttle maps. Usually the lower number is the more powerful and has the most power consumption. After the initial 3-4 values, it switches to wet ECUmaps with similar power and fuel consumption but different throttle maps. Please check the official forum for all the released cars’ ECU map characteristics.
– New launch control for all cars. Now with manual clutch, just engage 1st gear, put the clutch and accelerator to the floor and the engine will stabilize around 5000rpm. Release the clutch gradually while keeping the accelerator fully open to avoid stalling.
– Audio engine optimizations
– Fixed potential wrong volumes switching cameras
– Fixed time multiplier for the end race replay
– Fixed wrong trackmap cars position during replay
– Intro sequence updated